Rory had called a realtor and was out looking at specific farms by the time I realized, “oh he’s really serious about this whole ‘move to the country’ thing.” He could see it, and I couldn’t. It just felt so out-of-the-blue. And I never had considered this sort of life. I wasn’t totally opposed to it, I just thought it was another passing idea of Rory’s. I mean, the guy has lots of ideas! I thought this one would probably pass.

But it didn’t. He’d report what he had seen with the realtor. And a few Sunday afternoons we would take a country drive, scouting out areas. I love a road trip, so these were dreamy afternoons as Ivar napped in his carseat. And as long as we stopped at a DQ, I was happy to wander country roads scouting our state.

I don’t know how the shift in my heart happened, but I do know when it happened. We were with a realtor looking at a farm, not far from where we ended up. Ironically, the house was in terrible shape and leaned slightly so that you felt it while walking from room to room. On the back of the house was a rickety old porch. And when I stepped out on that porch I saw myself painting on an easel. I loved that idea, and instantly, I could see this life as my own. Which is still a total mystery in this story because I don’t paint! But I saw this new version of myself—something fuller, more creative.

We were pregnant with Elsie at that time and went on a babymoon before she arrived. I remember sitting by a pool and thinking of that leaning porch, with me painting on it. I turned to Rory and said, “I came untethered. I feel it. I feel like we can make this move.”

Plus, I am always looking for a good story. And if this would turn into an utter mistake, at least it would make for a great story. That attitude of always looking for “the story” has served me well my whole life long. I highly recommend it. Big stories often come from big, risky and wild ideas. And two sweet suburban kids trying their hand at farming seemed to check all of those boxes.

I had another epiphany after we had moved in and settled here for a while. As we worked together on projects, in the garden, making plans for animals, I realized that Rory and I are our very best when teamed up. And something shifted so that if Rory had an idea, I was fully behind him, ready to support and do whatever I could to make sure we gave it our all. That was an important shift, because it meant this wasn’t just Rory’s dream. I was fully on board, excited to hear what else was tumbling around in his head. “Goats? Great! Let’s do it. I’ve heard you can make soap from goats’ milk…” Now I’m the one asking for a dairy cow.

Along the way, we have had many people contact us and share their own wild dreams. More often it is one partner’s dream and the other is sort of nodding their head supportively, but maybe not enthusiastically. And I just wanted to write and say: that’s okay. Keep moving forward, because you may very well have your own untethering, where your own dream is suddenly birthed into the other’s dream. We all get one pass in this life, and I land squarely in the camp that says, “Why not?”

I still don’t fully understand why the thought of my painting on a porch was the vision that shifted my imagination for our future. We don’t have a porch and I still don’t paint! But I do believe we are always right in the middle of our story. So maybe these parts will come clear, given time. The story is in God’s hands, anyway. 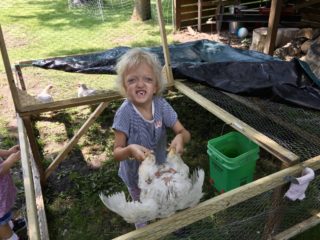